It’s Happened! – Text Me, Love Mom – Two Girls, Two Boys, One Empty Nest is available from all your favourite online booksellers or from:

My four kids have moved out into the wide, wide world. Now I’ve been the recipient of the text that said simply, “Mom, I’m lonely.” Or the more practical, “How much milk do you use to scramble two eggs?” much preferable to the famous, “Mom, it’s all gotten sketchy. Can you help?” There has also been the late night text, “Mom, you awake?” before taking part in a long conversation from the dark living room.
Back up you kids, I want to run through that all again. Except for that bit, oh and then there was that other adventure we could give a miss too, and of course, the time Lily ran away. I’ve wrapped it into a heartfelt tale of letting go when you really want to hang on tight. If you’re getting ready to send off an offspring, or are anticipating that – Text Me, Love Mom – Two Girls, Two Boys, One Empty Nest is the book for you this summer (or your friend…or your mom or …) The book was written through bouts of apprehension, strict counseling, and therapeutic laughter as I tried to satisfy my deep need for correspondence by tapping into my phone, “Text Me, Love Mom.” 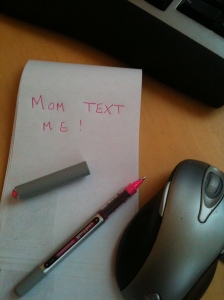 I’m not old – not some little granny – well, I’m a grandma, but a young grandma – just fifty-one.  That’s just eight years older that Julia Roberts who just finished eating, praying and loving, and it’s ten years younger than Merly Streep.  And I’ll be any age that lets me sing my heart out to Pierce Brosnan ( age fifty-six)) on a mountain top in Greece.

But I breezed into my local office supply store to update my printer because it ‘thinks’ way too long before it will respond to my tapping the print button, and in no time I felt like I was born in ‘the early days’ as my grandmother used to say.   I had to direct myself to listen really, very carefully to the twelve year old sales clerk who was so patiently telling me why it wasn’t the printer that was at fault, but that the printer was too fast for my much older tower computer’s USB port and what I needed was not a printer, but to replace the ancient computer with a small lap top which I could buy for not much more than the high tech printer I wanted (but didn’t need) and if I wanted the teeny tiny laptop that would fit in my purse, all I needed was a exterior hard drive which was the size of a deck of cards or I could even (be patient, I could have this confused in my addled fifty-one-year-old mind, as my  concentrating was further impaired when the baby clerk mentioned something about the system his wife used – did twelve-year-olds have wives – was he possibly twenty-four?) …yeah, I could even sign onto a hard drive warehouse thingy where they (were they robots) could keep my hard drive contents on a shelf somewhere far away.

We have a same age friend who tells my husband and I that we have to “embrace technology”,  and believe me I want to.  I do.  Or I did. But my heart was beating so, so fast in my efforts to embrace what the hec this clerk was talking about and I remembered that I needed a new  fade and water resistant uni-ball bright coloured felt pen to replace the old one that one of my adult kids took off with the last time they were home, so I let the nice ‘man’ help someone else while I went to catch my breath one aisle over.  What caught my eye next was a paper shredder – I refuse to buy a paper shredder.  Now that is a testament to one’s age.  Ask anyone over sixty – they all own paper shredders.  Probably even Merly Streep.