It was a bit of a panic helping my youngest daughter, Lily, leave home again.  Her big sister, Zoë, came by to do a necessary last minute repacking of an overstuffed suitcase hours before the flight was to depart.  Lily was exhausted, and wired – finishing a work project while simultaneously debating her travel outfit and fixing a turkey sandwich in an effort to avoid plane food on the eight hour flight. She hadn’t packed her toiletries, had to call her cell phone provider for overseas coverage, and was still debating over which photography equipment to bring.

When you don’t know what to write, but feel compelled to say something the tried and true advice is to always write from your heart .  I’ve been dealing with confused emotions by writing stories since Miss Simon’s grade four class, but once I had kids – four of them – taking care of them, mothering, and managing a home was the other thing I did – along with the story writing.  Some of my most intense, pleasurable days occurred when the words and ideas poured out of me while I was working amidst a buzzing household of six people.  As a young mom I formulated a plan to adhere to a schedule of a three hour block of writing time that could happen between two school bells – the morning bell and the noon time bell, even when I still had little Lily at home busy at my knees with a box of toys.   That schedule might have been do-able, but when I was really in the zone, I’d whip my kids up some lunch, push them back out the door (ours were neighborhood schools) and let Lilly sit on my lap when she got bored with Mommy’s insisting she was going to stop typing soon …very soon. 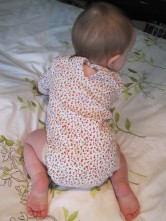 We’d rush to piano lessons or a baseball diamond with me still rewriting the story in my head.  And I know more than once I told myself I’d stop once the rice pot came to a boil, but instead the rice would burn and finally I would say, “Okay, okay, Mommy’s back”, and I would return to all that family and household management. And so the years went by until the kids started to leave.  Zoë, the oldest, went off to university when I was just forty-three, the age some women have babies at now.  Cole and Hudson soon followed their big sister with ambitious travel and school plans.  Lily was just seventeen when she finished high school so we naturally assumed that we’d have a kid in the house for a while.

Our kids are close, tight knit, a little band of connected individuals.  That makes me happy.  Proud even.  But Lily felt so close to her siblings that when three of them wound up on the west coast, Cole and Zoë sharing a house while attending two different universities, and Hudson a ferry ride away, Lily decided she belonged on the coast too… and so the nest emptied just like that.  It wasn’t exactly a smooth transition and more than one of those kids had us all on high alert from time to time making their way in the wide, wide world.  Still most of the interruptions and interferences to writing became of my own making . Yet at times like these, with school bells part of the distant past, and kids on work paths and in their own homes and apartments, I miss working amongst the chaos of their noisy lives.

Staring out at the autumn colours in my back yard, I’m amazed at the deep pink and violet sweetpeas still clinging to the tall vines.  I think again of the wise older neighbor two doors down, who told me when I was blue about my kids leaving that they would come back.  I doubted her words,  but in fact they have all four returned to perch here now and again.  Lily, the most travelled, spend this summer, caring for the house and yard while I was away at our cottage.  Turns out she has quite a green thumb and was more diligent about watering and weeding then I ever was.  I returned in September to share time with her and a garden that was still showy with the blossoms from her organized efforts. During the weeks when we were all here Lily would often come home after we went to bed, and leave for work before we were up, but on some level, through our slumber her dad and I were aware of those sounds of a young adult with us again.

With the wonders of technology I already know that Lily’s walking through a neighborhood in London, England today.  She’s carrying on with her life and I’m carrying on with mine.  I watch a little sparrow land in the golden leaves of the apple tree and fly off down the lane and feel just a little melancholy.  It will be their dad and I again, passing the winter evenings together, eating our late night popcorn alone. Before we fall asleep we’ll imagine each kid in their place, including our Lily, home for a while and now far away.  I am now the neighbor woman that tells you – don’t be too blue – they do come home to perch. xo