In honour of American Thanksgiving and the tradition of young adults coming home for the first long weekend from college, I wanted to share a glimpse into our household during the Canadian November reading break and the first time my eldest returned to the noisy house of siblings she’d left behind.  So I give you this from Text Me, Love Mom; Two Girls, Two Boys, One Empty Nest – only the nest wasn’t empty yet – just reeling from the departure of the eldest…

And so we had Zoë with us for her short fall reading break.  On the Friday and Saturday nights the house filled up with family and three or four of her best friends.  But Sunday, close to dusk, each of my four kids trickled back home from separate outings.   From upstairs I could hear them talking softly in the living room.  Coming down I found them in the dark – the boys showing their affection for their sisters in their odd boy way.  They had dog piled on Zoë and Lily.  It was reassuring to witness them that way, like a big pile of puppies heaped on top of each other.

One of my few friends with children older than mine had warned me that Zoë would have changed.  “I know it hasn’t been long,” she said, “but trust me, she’ll be different, more grown-up.  You’ll see.”  I had been nervous.  I didn’t want her to change, or even grow up particularly.  I would still rather spend a small part of my evenings driving her to piano lessons or to her girlfriends’ houses instead of e-mailing her in Vancouver or fighting for phone time with her long distance boyfriend.  But my friend was right.  My eldest daughter was different.  Oh, she didn’t have a total epiphany or anything.  She didn’t say, “Mommy I’ve realized how burdened you’ve been looking after us four kids.  Put your feet up and let me vacuum up the nacho crumbs before I massage your tired shoulders.”

But she was different.  I noticed that the first evening she was back as we lingered around the table after dinner, bombarding her with questions. It was a look on her face, a quality it was hard to put my finger on, except to say that she had drifted away a little bit.  I had gazed around the room at the others, Cole and Hudson and Lily, and imagined us all reuniting after future ventures.  Zoë swore that she would travel to the far north someday, being captivated by the notion of a trip to Yellowknife of even Inuvik, whereas Cole insisted he was going to snowboard in the southern hemisphere in Queenstown, New Zealand.  Hudson was harder to pin down –I think he aspired to travel back and forth in time, and back then I wrongly viewed Lily as a home body.

In the upcoming Christmas season I would be happy to imagine them all staying put.  I was going to pretend for the three weeks that Zoë would be home that she had never left.  We would decorate a too tall, slightly lope-sided tree together and Will would insist once more on putting up the pissed-off looking angel Zoë made in kindergarten.  I wanted it to be a holiday season full of my kids dog piling on top of one another, and watching Bing Crosby’s White Christmas, all of us singing aloud to the Sisters’ song –

I intended to encourage Zoë to humor Lily and I, and come skating with us on the lake near their grandparent’s property, after which we three would go for steamers, before coming home to whip up a batch of date-filled butter tarts for Christmas Eve.  She’d be impatient to go hang with her friends, (who would happily devour the butter tarts), but I hoped I could convince her to indulge us with a skate around the lake first.  I’d ask, but I promised myself to be a grown-up about it and not harass her to join us – just to ask.  She needed time to reconnect with her same-age peers.  At ages eighteen and thirteen my daughters couldn’t really act as one, but I knew that on Christmas Eve they would raise their voices together and happily sing about it.

You hear it both ways.  Some people say girls are easier than boys.  “Oh, no, no, no,” others will tell you, “boys are easier”.  I’m not sure what exactly easier encompasses.  Easier to get along with?  Easier to discipline?  Easier to lose your mind worrying over? I do know that when Zoë went off to study art at Emily Carr – I thought a mother must only feel this out of sorts once.  But a year later I had to launch, as they say in those swishy mother circles, her exuberant brother, Cole.  Kids being kids, no two alike, and all that, there was hardly an ounce of knowledge I could borrow from Zoë leaving our nest when Cole decided to follow suit…

Happy Thanksgiving from your Canadian friends and if you want to read more of Text Me, Love Mom and the rest of all that …please check out http://www.amazon.ca/Text-Me-Love-Mom-Girls/dp/1771800712

Staring out my office window a week ago, the last sweet peas still arched towards the sun, a late yellow rose had put out a new bloom, but now that is behind us for months to come.  The snow has arrived.

I tend to do more fall cleaning then spring cleaning – getting ready for time spent inside during the cold, and so came across a little journal I kept while my youngest daughter and I travelled together for a few weeks.  As much as parents like me, who managed busy households, dreaded all the kids moving out, this little journal reminds me of some of the best times with those young adult children.

My daughter Lily, was just eighteen and almost a year out of highschool.  It was her ‘gap year’. Lily had travelled solo back to Italy where she had done a language immersion program in high school. Her dad was nervous about her traveling on her own, so when she suggested maybe Mom could meet her over there for ten days or so, it was an easy sell. We both thought we should meet in Paris and then travel to the South of France.  Just the phrase, ‘the south of France’ stirred our dreamy souls. After a few exotic lazy days on the beaches near Antibes we took a train to see Milan, after which I was to return home and she was resuming her trip by meeting friends in Barcelona.

This was the journal entry I came across on the chilly November day, written on a warmer day several years ago in May –

“We’d arranged a taxi to pick Lily up at the hotel at 5:30 am this morning and bring her to the bus station. From there she will shuttle to the airport for her flight to rejoin her young friends in Barcelona. If she was anxious to get back to the freedom of being on her own, she never let on. 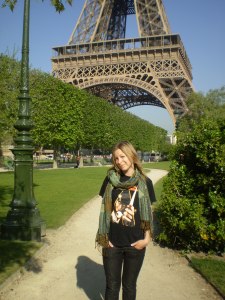 It made me happy to buy her a pretty summer dress and she wore it in the street of Grasse and Antibes, but she put on her black jeans and a t-shirt to travel.  I watched her gather her things from the hotel room and thought about what a sweet time we had together, sitting above Paris on the steps of the Sacré-Coeur Basilica in Montmartre – Lily describing the type of man she might like to marry, or lying on the beach in Côte d’Azar, trying to pretend we belonged there.  We had joked that perhaps we would have a spiritual experience when we went to see Leonardo da Vinci’s Last Supper and then afterwards whispered in the sunny square of the basilica that of course, we had been moved by the majesty of the work.  That was just before a priest clucked his tongue at the hem of Lily’s dress, indicating it exposed too much of her legs – after we agreed that he had taken a long look at their God created beauty.”

I finished that journal entry by saying, “Lily and I have made memories to share to keep me happier when she goes off to university in September, and for other times, years from now. Lily knew she was running late this morning but let me go back for three more hugs and French ‘cheek kisses’.  I didn’t think I’d go back to sleep after climbing the stairs back to our small room but slid in between the sheets of the bed she’d occupied, where the balcony door was open to the breeze, and I fell into dreaming. When I have trouble sleeping with all of them gone off, I’ll try to remember the meals I shared with my youngest daughter, the sunsets that fell over our evenings, the fashions we clamored about in Milan, the late night conversations we whispered across our pillows – so that when the house is empty, with her and her siblings all living away, I’ll be able to bring it all back to mind.”