It’s been a different sort of summer. I’ve been living the dream, as they say, staying four long weeks at our lake place in the North Shuswaps. We’re on the shore on a stretch of water that carves up this forested place with arms that go off for miles in a multitude of directions.

My kids, and granddaughters, and my younger brother, a niece and a nephew, a dear cousin, and good friends have circled round this stretch of lake this summer, through little villages that burst with seasonal energy – to swim and boat and break bread with me. Odd to say me, not us. But I’ve had to host alone this year as my husband’s had a strange summer too – an extremely arduous aspect of his work has unfortunately landed smack in the middle of normal holiday time.

And the summers had another weight to it – my elderly parents have had a lovely family member as the live-in caregiver they require, but she needs to move on now. My siblings and I have all spent time trying (oh man, we’re trying) to convince both our mom and dad that moving into the nice, comfortable, sociable, well managed … seniors residence we helped my mom find will be a better choice then the house they can’t manage any more. Honest dad, it will be.

So I’ll bring up the beach chairs, tie the kayak high on the shore, wash one more load of towels, close the blinds, pack the hanging planters into the car with my suitcase and big box of BC peaches and wind my way around this giant lake towards home. 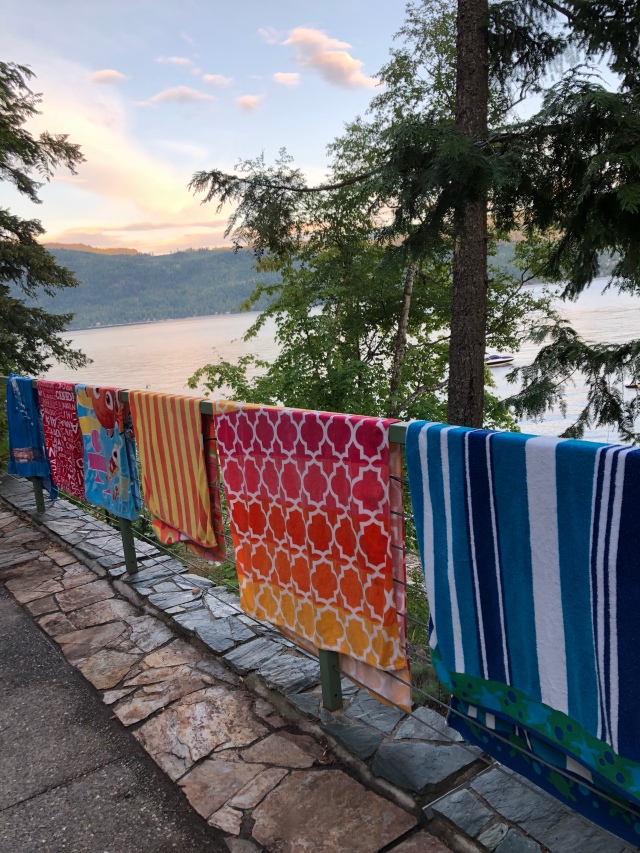 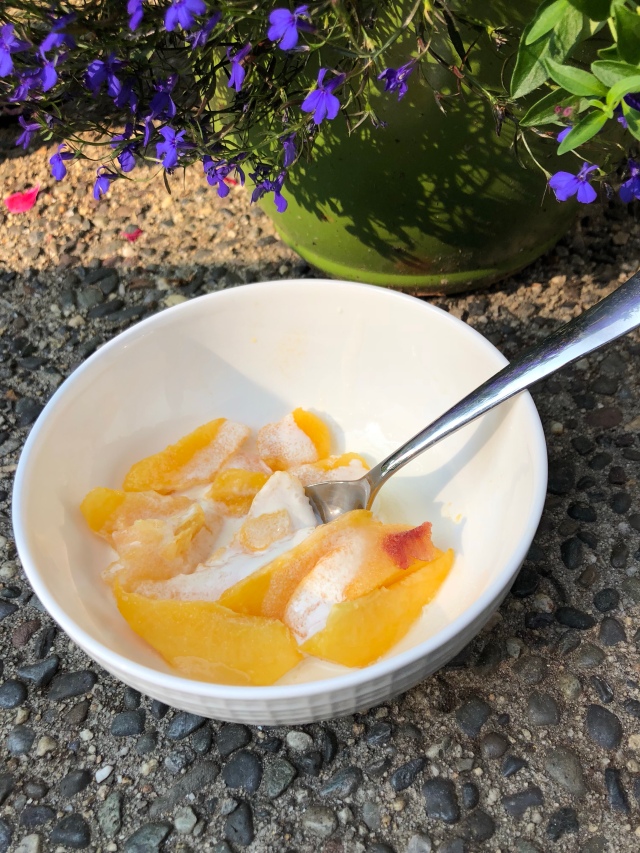 It’s been a different time as times go. And I’ll surely blog about the time to come.

Looking for another read by Candace Allan – check out the book Text Me, Love Mom, Two Girls, Two Boy’s, One Empty Nest.

Mother’s Day and the Gift of the Backyard Garden

Vibrant little green peas, the smell of carrots with specks of soil still clinging to them, earth with the aroma of green onions – the promise of the backyard feeds my soul. Every May the calendar days around Mother’s Day and my internal genetic calendar push me to turn over my tiny plot of soil, buy a handful of pretty seed packages, and tuck their contents into rows ready to water.  It’s a tradition passed on to me from my mom and her mother, like colouring Easter eggs around Good Friday, and picnics on a blanket on a warm summer day.

On Mother’s Day when my four kids were little and excited to make me a tray in bed with the most delicious passion-filled luke warm pancakes, overcooked eggs, and bowl of Captain Crunch, I would elicit their dad to help me sneak pass them because always at that time of year the empty garden spots among the blossoming trees were just begging me to prance around on the dewy lawn and be lifted up by the best work I know. I’d run back to bed for my tray of child-love when it was ready.

My mom taught me the simple beauty and deep satisfaction of the vegetable garden. It was her favorite work too. She has five children and I have four. Raising a family is chaotic and chore-filled, and raising a garden takes you into another space for a short reprieve from groceries and laundry, meals and cleaning, ferrying little ones from here to there. Somehow in the garden you find time to dream a little dream while kneeling in the soft grass with seeds in hand, pushing aside an earth worm, thinking about how the summer might go, of people standing barefoot picking peas, or biting into the strawberries the squirrels don’t steal. It’s time away from time.

I joke with my family that, “It’s all going to be okay. I’ve got the fall harvest in,” when in reality my eight by six foot bed of vegetables only supplies a few colourful meals and delightful raw snacks, not like my grandmother’s farm garden that was needed for survival ‘in the early days’. Still after retiring to the luxuries of town, my Nanny, an image of independence, planted a back yard garden; hills of potatoes and squash, rows of beans and peas, carrots and beets, circled by cornflowers and raspberries, and she did that until she was ninety-four-years old.  It’s my inherited Mother’s Day gift, from my mom, and her mom to be drawn outdoors with a reverence for the sun and the soil and the magic ability that nurturing the earth has to calm and sooth us, to take us to a sweet spot every May of hope and inspiration.  (Discover more at Amazon.com )

Who knows where you will discover the tid-bits of information that ease you through life from season to season?  Long ago, a neighbor – a guy who studies entomology (bugs) and engages in long treks in foreign places – told me he never pulls up all his spent plants in the fall, leaving instead a ‘winter garden‘.  So I pass by flower beds where the owners have meticulously cleaned up every last bit of perennial foliage, undertaking a clean sweep of orderly beds, so only stubble remains in the black earth, readying them for the coming seasons – and I’m so tempted to follow their methodical inclinations.

Somehow I resist, instead I carve out a place for small heaps of snow to pile around a stand of stiff delphinium stocks. I leave a nest of black eyed susans stems to sparkle with crystal hoarfrost .  In the back garden the morning sun reaches a small bed of gangly flocks and shines through the tired golden leafs.  This year I even left the most stately eight foot hollyhocks, rising out of a bed of  snow.

I’m grateful to my neighbor who led me to the winter garden inspiration, but now it is late February.  The snow is crusty and hard, the dry crisp leaves rattle in the breeze, clinging to the stems like winter clings to the landscape.  On the February long weekend we made the drive through the mountains to our cottage seven hours west.  Home in Calgary, Alberta is a gardening zone three. A hardiness zone  is a geographically defined area in which a specific category of plant life is capable of growing, as defined by climatic conditions, including its ability to withstand the minimum temperatures of the zone. [1]The cottage, in the interior of B.C., is in a place called the Shuswaps and is a more encouraging zone 6.

During a short break from the wet weather we were having that weekend, the sun slanted through the slate blue clouds and searching hard, I found the smallest promises of spring’s revival. These weren’t tulips or even wee purple and yellow crocuses.  There wasn’t even a brave pale snowdrop blossom in sight.  But on the far side of the cottage, against the warmest wall I found teeny weeny hollyhock seedlings, dotting the damp earth.  I had shaken the small flat seeds from spent buds and stamped them into the ground on a fall day months previous, and now here were the beginnings of hollyhocks that would grow to reach the kitchen window high above them, and by August the long stems with a multitude of  ruffled pink and white blooms, encouraged by the sun and warm nights, will stretch even higher.

In that zone six it is exhilarating to reap the abundant beauty of nature’s kindness, but my heart swells with admiration for the determined and faithful green thumbs working the soil in Calgary’s much cooler zone three designation.  Gardening in our foothill’s city is an exercise in patience, optimism and hope.  It might be long weeks before I find the hollyhock seedlings here where crusty snow is still the tired background for my now unappreciated winter garden. But alas, when I do see the itty bitty pale green seedlings peeping through the earth, displaying their own determination, they will beckon my faith in the homecoming of our sweet, though perhaps, too short, summer. 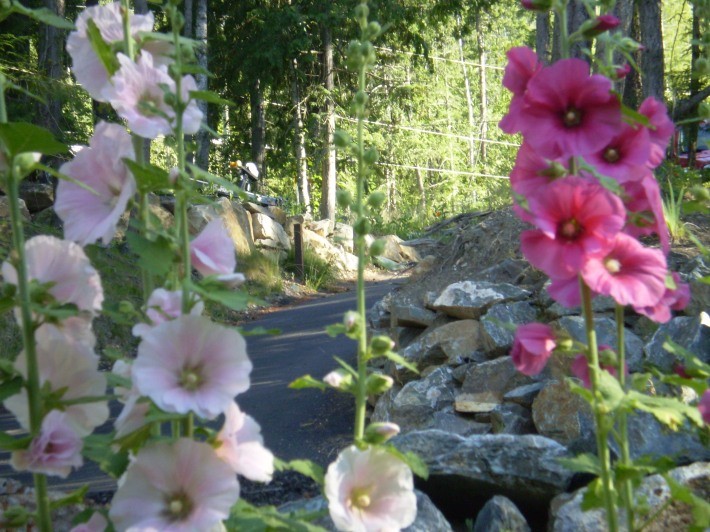