Can you believe it?  It’s almost over.  Your kid has been away to university for a whole school year and now it seems that the time flew by – except there were those long November or January nights when she didn’t return a text or answer her phone and you sat up in the living room, with the wind blowing outside in the dark.  And you knew it was wrong to be so worried.  That the dark she was in was probably a noisy club with friends laughing and pulling her onto a dance floor.  And when you woke again to the ding ding of her reassuring text – that’s what it was exactly.

My youngest, Lily, went to university in Montreal, all the way across the country, and I could say that the reason that I managed to visit her there a few times  was because I love  that French Canadian city, but it was hard having the last of four kids away, and so I went for that reason also.

A very short time ago I wrote about helping that youngest daughter move to Montreal.  But maybe I was sleeping under a tree like Rumpelstiltskin because it appears that years have gone by since I first left her standing on the corner of St. Catherines and Rue Guy in front of Concordia University. At this time of year when parents are contemplating how it will go doing something similar with a son or daughter, I thought I would tell you about moving Lily home.

Lily spent two years in one teeny studio apartment on De Maisonneuve Boulevard, then did a year’s exchange at foggy San Francisco State University discovering that American’s are not, as she naively thought, just like Canadians but different in a myriad of interesting ways. Lily returned to Montreal, to an even smaller apartment on Cote de Neiges, with a view far across to the Pont Champlain Bridge. (Along with her studies she did two internships at popular youth culture magazines  – the shamefully popular completely unpaid for internship).

I flew to Montreal with the whispers of approaching summer, to help her pack up and return to the west.  Waking up in her studio on Cote de Neiges, with the sun deceptively warming the apartment through the window, I contemplated the basics of setting up and dismantling the belongings to support a happy, satisfied life.  This subject had been on my mind because of my own efforts at (here’s that tired old word again) – ‘decluttering’.  It was a cold last bit of April, while we closed off that part of the life my daughter had in Quebec – during which she obtained her degree and blossomed from an eighteen-year-old girl, who I warned about street dangers and trusting strangers, to a twenty-two-year-old woman, who warned me as she left to say goodbye to friends, that she would return late and to just lock the door behind her.

When we first set up Lilly’s apartment I took notes, out of curiosity, to see just what purchases were required to get a young person going, We had arrivived on a red-eye flight from Calgary and drove a rental car directly to the Ikea in the suburbs for the purchase of twelve dollar lamps and the twenty-nine dollar desk, and the one hundred and twenty-nine dollar bed frame, along with two equally cheap stools to sit at the tiny counter in the galley kitchen-ish area.  And every summer and Christmas break we warned Lily about bringing too much back to Montreal from home, but still she accumulated a series of coats and footwear trying to deal with the Quebec cold, along with electric fans for the oppressive heat in the beginning and sometimes end of the term, and a small library of books from her classes, and portfolios full of edgy photographs from her Fine Art photography degree.

In the process of dismantling her home we packed and delivered to Greyhound Express three large plastic containers of the heavy items – books and boots and some dishes she was fond of, as well as her record player and records. Did I mention she had convinced us to purchase an actual record player as a birthday gift and I could never dissuade her from adding to her load of Montreal possessions by carting Led Zeplin, Fleetwood Mac and Three Dog Night records from our basement collection every trip she took home to Alberta.  A little table and one chair had been sold on Craigslist, two second hand book stands were given away to an apartment neighbour, and friends had come to claim some of the most intriguing prints, along with the utilitarian warm clothes Lily was ready to part with. The guy she found to sublet for the remaining of the lease, got a steal of a deal on her bed and mattress and Lily directed me to leave him the never used cake pans and muffin tins, saying, “See Mom, I told you four years ago I wasn’t going to become a baker.” 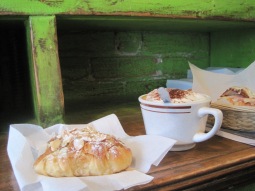 We ate our meals at my favourite creperie the last day – having done a far better job of diminishing the contents of her refrigerator than the contents of her apartment, so that we would still have to show up at the airline counter and have no choice but to pay for extra suitcases, and still have purses cleverly tucked into overstuffed backpacks, and carry-on computer cases, probably with the last used towels falling out of them.

Still I had to contemplate this: if Lily had lived comfortably with the total accumulation of  goods she had when I arrived -what was it that I had filled my  home with for several decades?  What are the precious goods, the necessary tools, the carriers of memory, and even the flotsam and jetsam, that surrounds me that couldn’t be sold to a few anxious buyers on Craigslist, tossed off to neighbours, packed into three small boxes on Greyhound and carried on a flight?

Preparing to call the last Montreal taxi driver that I would converse with in a long while, I realized that as minimalist as we’d been, we still had a fair load for flying purposes.  So, I decided that Lily and I must work at giving the appearance of lightness, of effortlessness –  at that airline counter where they would weigh things up.  “Here we are, it is just her and me, and a few bags, nothing to get worried about, or charge us ridiculous amounts of money to bring.  It is just us,” my attitude would say. “See – we are ethereal.  We are light. So just us – along with a good part of the accumulations of life during four years of growing up.  That’s all.  Just that.”

To read more about Lily and I – along with the chaos of four kids being launched into the wide, wide world – during that next stage of parenting, click on the following links:

One thought on “Bringing A Student Home – Goodness and Light”