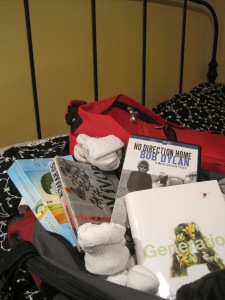 Why was I always surprised by what it was like being the mother of this boy, Hudson – this almost man?  I was driving him home from his second year at university.  The term was finally over and I knew it had its up and downs, and that Hudson’s attention and focus had sometimes ebbed.  But I saw first hand when I arrived to help him pack, that amongst his clothes, CDs and school texts, there were stacks of philosophy books, not required course material but books he’d picked up second-hand for pleasure reading because despite all resistance otherwise, he will always be a philosophical and reflective thinker who enjoys titles like Our Inner Ape, The Essence of Sufism, or On Being Free.

I was there staying with the relatives he boarded with during those last days and saw that he studied hard for his final two exams between the pull to visit a pub to say goodbye to friends he described as good guys, guys that he would miss.  He was more mysterious about the girl he needed to see one more time.

Hudson had said he was looking forward to our road trip home.  He even joked about it being a time to bond.  Yet the mood was sober when we set out. He’d written his last exam that morning and I heard relieve and satisfaction in his voice immediately after, as he embraced the relatives he’d lived with, and together we left to meet one of his friends from high school and her young husband for a goodbye lunch. At age nineteen and twenty-three respectively, they were expecting a baby in a month, and were both excited and scared about the unplanned path their lives were about to take.  Hugging his high school friend goodbye, her belly and the baby inside pressed against his own stomach, might have put the final touch of melancholy onto the mood he was in as we headed for the ferry.

We boarded a vessel two hours after reaching the terminal and consciously or not, spend most of the voyage apart, reading and watching the ocean waves on opposite ends of the ship.  We spend that night in Vancouver with Hudson’s big sister, Zoë, and her boyfriend, in a house full of boxes and spilled belongings, because they were also packing up and switching residences as they were both starting Masters programs in the fall.   They were thrilled to be making changes, but on that night they were weary and conversation was soft and slow in the dim, cluttered house.  Hudson and I left Vancouver for Calgary the next morning, under a steady spring rain and a dull sky. Driving through the dampness along the long, straight highway to Hope, listening to my son’s choice of music, I actually wondered if his mood had changed so much so that he had given up the idea of enjoying the trip.  A song came on that I particularly liked, Bowl of Oranges, “I like your music more these days,” I ventured.  “I liked what you were playing yesterday at the ferry terminal, too.”

Sounding exasperated, and only slightly amused at my musical ignorance, he told me, “That was the same song, Mom. It’s by Bright Eyes.  You always say you like Bright Eyes.”  We gassed up the Durango and wound our way to a coffee shop in Hope.  He ordered a yogurt, spinach salad and a water, while I justified my sugar and caffeinated choices of a brownie and cappuccino, as necessary for the road.

It was exiting from Hope where I took the wrong highway.  I realized it in time to go back and still could have made better time by returning to the road leading to the Coquihalla Pass over the mountains.  The wide, four lane surface would have taken us over the mountains in far less time.  So what made me stay on the longer, winding two lane highway that curled through the towns of Spuzzum, Boston Bar, and Spences Bridge?  My tired son wasn’t aware of my mistake and I took my time before I told him what I’d accidentally done.  He didn’t react except to ask if I wanted to listen to a Bob Dylan documentary on the car’s DVD player.  Sure, I said.  Hudson had discovered Bob Dylan in his first semester of university. He had been away from home for the first time, experiencing residence life which he disliked, and his first west coast dark and rainy winter.

I must have discovered Bob Dylan spiritually for the first time in my youth, too. Via cell phone conversations our absent son had turned his sixteen-year-old sister Lily, who was of course, at home with us, onto Bob Dylan at the same time he made his discovery, and she had been downloading and buying all his works so that our house had recently filled up with – “ if I don’t get the girl I’m loving I won’t go down Highway fifty-one no more”.  Lily set her CD alarm clock to wake her to Spanish Harlem Incident.  After school it was House of the Risin’ Sun,  It Ain’t Me Babe, and Like A Rolling Stone, and after she fell asleep at night I crept into her room to turn his crooning off.

A dappled sunlight broke through the clouds and the car crested the mountain top.  I saw a small sign beside the road that said, ‘Jackass Mountain summit.’  Hudson was singing along with Dylan. My kids don’t mind telling me that I can’t sing, but this time there was no comment when I joined him, “Look out the saints are comin’ through  And it’s all over now, Baby Blue.” The commentary continued, reviewers talking again about how Dylan resisted being pigeon holed, he didn’t like his songs to be considered protest songs.  Listening, I noticed as we sped down the road, how even that high up in the mountains the trees were in spring bud.

“Hey Hud, isn’t it something,” I said, thinking back to the night before listening to Zoë talk about applying for a teaching position while she did her Masters, “ Can you imagine walking into university class and having someone as young as Zoë for your teacher?”

It wasn’t the response I’d anticipated.  I’d hope to lead into a discussion about teaching being an option for Hudson.  He always saw through me, and blocked my thinly veiled suggestions as if he was still playing defense on his high school football team. “Look Mom, I can’t think about going back to school.  I know I’m not doing it this September.”  He was clearly a frustrated philosopher and I felt I ruined whatever easy mood the music had brought us toward.

We stopped to stretch, and buy chips, water, and a pack of gum at a gas station in Spences Bridge. As we were walking out Hudson nudged me,  “Weird, eh?  Listen.”  The gas station attendants were an old man and a teenage girl, and somewhere under the desk they had a radio on playing Bob Dylan’s A Hard Rain’s a Gonna Fall.  We stepped outside with an easiness between us again, talking about feeling goose bumps and what Dylan might think of the  synchronistic occurrence.

Leaving town one of my favourite songs was being sung now on the DVD, or maybe just the one most imbedded in my memory.  I sung out loud, though some of the words were guessed at or murmured.   The road ahead of us looked like it was heading off the globe, the pavement met the horizon, and it seemed the car could lift off there and glide into the blue sky.  “Isn’t it inspiring?” I asked over Dylan’s voice crooning, “I’m ready to go anywhere, I’m ready for to fade  Into my own parade, cast your dancing spell my way, I promise to go under it. Hey ! Mr Tambourine Man, play a song for me
I’m not sleepy and there is no place I’m going to.” I was worried about Hudson who wasn’t responding to my comment, unaware that he was  considering the surrounding steel, gray cliffs and deep valleys and a wide river way below us before he said, “Yeah Mom, it is beautiful, isn’t it?”