Mid-January and I’d be so happy to steal away to my favourite latte shop, bring a hot one home to my little office, stare out at the winter white and brown back yard and get back to that novel I started way (seriously way) too long ago.  But this wise guy that I’m married to insists that, having taken a good chunk of the last seven years writing and publishing Text Me, Love Mom – I should put some of my restless energy into sharing it (okay, promoting it) to all those folks out in the wide, wide world that I was writing it for.  Readers are telling me that Text Me, love Mom is funny – funnier than I thought, as I was caught up in the drama of those four darn kids freaking me out with the insanity of ‘twenty-four being the new eighteen’ as they made their way in the world. Read Text Me, Love Mom; Two Girls, Two Boys, One Empty Nest and you’ll find the funny bits, but I decided this January morning to offer up a more dramatic ‘teaser’.  The chapter is called ‘Teenage Runaway’ and begins with this great quote from my sassy youngest kid –

“You and dad are really the wrecking ball of all of our outlaw, runaway fantasies. Why couldn’t you jerks go and be crack addicts or religious fanatics so we could have excuses to live on the wide open road?”

This is a story of all the ways and times my kids left home, but there is a chapter I thought best to leave out until Lily granted me her permission to put it in. “It’s okay, Mom,” she said. “It will add drama. I’m happy to supply some drama. Just as long as you remember in the telling of it, that was then. This is now.” 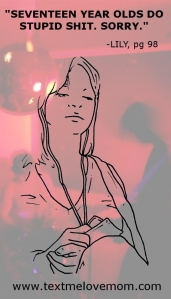 This is the story of Lily running away — only she, of course, never calls it that. Much to her chagrin, the rest of the family does. I try not to think about it too often, the way you do with times in your life when you are so terribly off balance. In fact, those sixty odd, uneasy days when Lily ran away were the first time we had a completely empty nest.

For twenty-three years, one month and twenty-nine days, I was a mom with children living at home. In the early autumn of her seventeenth year, Lily was going to be the last kid still residing with her dad and me. After a summer of living with us and doing lucrative summer jobs in Calgary, both Cole and Hudson had returned to the coast. Hudson had moved in with a bunch of guys in Victoria, and Cole, elated to be starting a film production program in Vancouver, was renting a room in the house Zoë and her boyfriend lived in. As I look back on it all, there had been some foreshadowing of Lily’s departure before she left home in the middle of the night without saying goodbye.

To be fair, Lily would tell it differently. She woke me up at two a.m., putting her face up close to mine to whisper that she couldn’t find her social security card and needed it for a new job she was applying for early the next morning. She went on to explain to me in my groggy haze that she was going to stay over at a girlfriend’s near the job’s location. I stumbled out of bed, despite her telling me not to. Standing in the light of the hallway, Lily told me she loved me and gave me a long hug, apologizing for disturbing my sleep. You are not a mother for twenty-three years, one month and twenty-nine days (Zoë’s age) without knowing something is bloody well up when that sequence of events takes place, but somehow I fell back into bed and had the last restful sleep I would have for weeks…

– poster by Shea Proulx and Creativision.